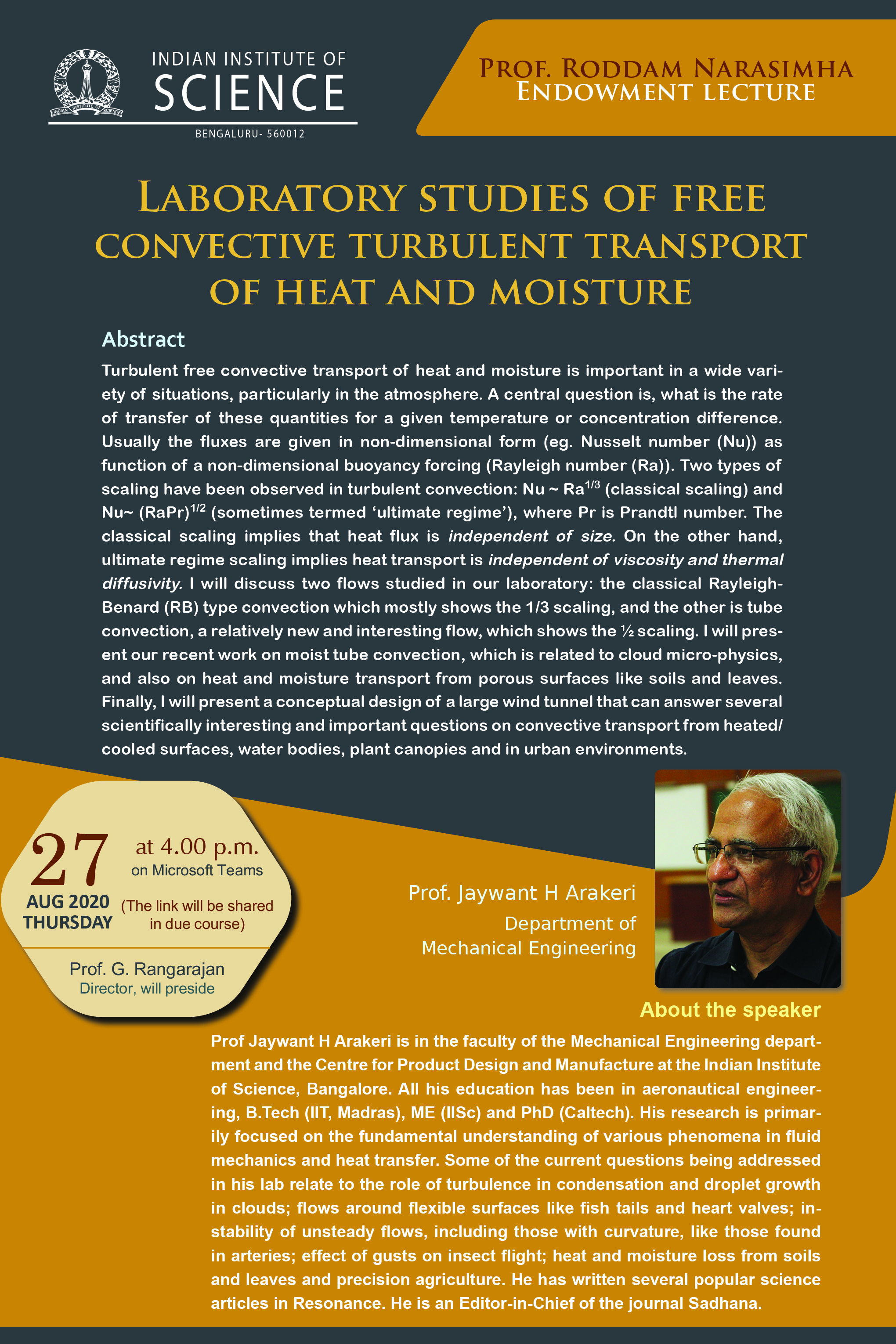 Prof. Jaywant H. Arakeri will be giving Prof. Roddam Narasimha endowment lecture on August 27, 2020, at 4:00 PM on Microsoft Teams [use the link for joining the Meeting]

Turbulent free convective transport of heat and moisture is important in a wide variety of situations, particularly in the atmosphere. In free convective turbulence, the flow is primarily caused by buoyancy forces, arising from gradients of temperature or species concentration, like water vapor. A central question is what is the rate of transfer of these quantities for a given temperature or concentration difference. For example, what is the heat flux (Watts/m2) from a plate heated to a temperature of say20 degrees centigrade above the ambient. Usually the fluxes are given in non-dimensional form (eg. Nusselt number (Nu)) as function of a non-dimensional buoyancy forcing (Rayleigh number (Ra)). Two types of scaling have been observed in turbulent convection: Nu ~ Ra1/3 (classical scaling) and Nu~ (RaPr)1/2 (sometimes termed ‘ultimate regime’), where Pr is Prandtl number. The classical scaling implies that heat flux is independent of size; for example, at the same temperature difference heat flux from a10 m2 plate is nearly same as that from a100 m2 plate. For turbulent convection of this type, I will show that there is an alternate, more physical and better way to non-dimensionalise heat transfer flux than Nu. On the other hand, ultimate regime scaling implies heat transport is independent of viscosity and thermal diffusivity. I will discuss two flows studied in our laboratory: the classical Rayleigh-Benard (RB) type convection which mostly shows the 1/3 scaling, and the other is tube convection, a relatively new and interesting flow, which shows the ½ scaling. A much debated question is at what value of Ra does RB convection transition from 1/3 to ½ scaling; I will give a new way to estimate this transition Ra. I will present our recent work on moist tube convection, and also on heat and moisture transport from conventional porous surfaces like soils and from unconventional ones, like leaves and packed rods. The moist tube convection is expected to improve our understanding of the role of turbulence that makes micron sized droplets in clouds into rain. Finally, I will present a conceptual design of a large wind tunnel that can answer several scientifically interesting and important questions on convective transport from heated/cooled surfaces, water bodies, plant canopies and in urban environments.

Prof Jaywant H Arakeri is in the faculty of the Mechanical Engineering department andthe Centre for Product Design and Manufacture at the Indian Institute of Science, Bangalore. All his education has been in aeronautical engineering, B.Tech (IIT, Madras), ME (IISc) and PhD (Caltech). His research is primarily focused on the fundamental understanding of various phenomena in fluid mechanics and heat transfer, in particular related to turbulence, transition to turbulence, unsteady flows, bio-fluid mechanics and evaporation from porous media. Some of the current questions being addressed in his lab relate to the role of turbulence in condensation and droplet growth in clouds; flows around flexible surfaces like fish tails and heart valves; instability of unsteady flows, including those with curvature, like those found in arteries; effect of gusts on insect flight; heat and moisture loss from soils and leaves and precision agriculture. He has written several popular science articles in Resonance. He is an Editor-in-Chief of the journal Sadhana.